Divest Smith College was joined by the a capella group The Notables to deliver the singing Valentine and card. “Please divest our endowment fund! Put big oil on the run! Wind and solar will get us through! We’re breaking up with fossil fuels!” they sang as they entered College Hall.

“President McCartney has not come out in favor of or against divesting our endowment from fossil fuels. We’re asking her to “be our Valentine” by accepting our card and publicly supporting divestment on Valentine’s Day,” said Callie Sieh ‘18J, a member of Divest Smith College.

“Smith College’s investments must reflect the values of the College. With 84.2% of the student body and over 85% of the student Senate in support of divestment from fossil fuels, the current investment strategy is clearly in opposition to the position of our student body,” said Eleanor Adachi ‘17, an outreach leader for the group.

Divest Smith College advocates for investment standards that will establish Smith College as a model for an economically viable, socially proactive, and environmentally committed institution. The campaign calls on Smith College to (1) freeze any new investment in fossil-fuel companies, and (2) commit now to divest within five years from direct ownership and from any commingled funds that include fossil-fuel public equities and corporate bonds. 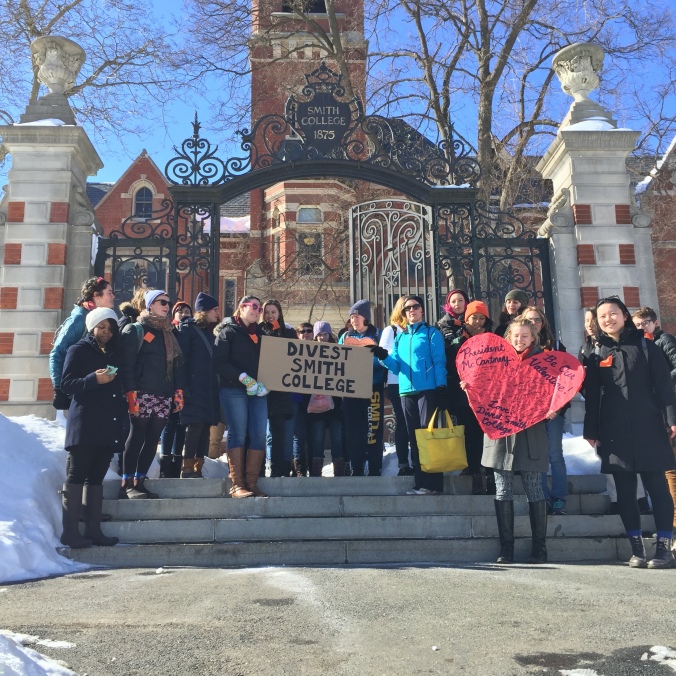 On September 8th an email titled “Fossil fuels update” was sent to students, faculty, and staff of Smith College. The email informed the Smith community that the Investment Committee of the Board of trustees had voted unanimously to transfer one million dollars of Smith’s endowment into a sustainable and global equities fund. The following is an open letter of response from Divest Smith College.

When representatives from Divest Smith College met with select members of the Board of Trustees last spring, we vocalized our belief that divestment from the fossil fuel industry is the right choice for Smith College. This belief is reflected by the student body, as shown by the overwhelming majority that passed a student body referendum last spring, in favor of divestment. The unanimous vote by the investment committee of the Board of Trustees to transfer one million dollars into Investure’s sustainable global equities fund reminds Divest Smith College that we need to continue to encourage a dialogue on campus about why we believe full divestment from the fossil fuel industry is what is best for Smith College and for the world.

Our campaign is centered around the belief that Smith College has a moral responsibility to divest. The Fossil fuels update letter focused largely on Smith’s value of sustainability, but Divest Smith College believes that investing in fossil fuels means much more than funding environmental destruction.We are financially supporting an industry that strips communities of the ability to thrive. In Holyoke, where there is a coal-fired power plant, one in four children has asthma. In Appalachia, where there is nearly unchecked fracking, strip-mining, and mountaintop removal, some communities’ water supply is so polluted with methane that it can be lit on fire as it come out of the tap. Climate change refugees, fleeing their homes due to flooding and extreme weather events, continue to grow in number. Those who are the least to blame for this crisis will suffer from it the most.

The letter did not address that Smith’s continued investment in fossil fuels is not only unaligned with Smith’s values, but also financially unsustainable. The market value of fossil fuels is calculated with the assumption that all fossil fuels on record will be useable in the future. However, in order to keep the average temperature of the planet from increasing any more than two degrees Celsius, 80% of fossil fuel reserves must remain in the ground. By remaining invested in fossil fuels, Smith College is betting on a resource whose value will inevitably and drastically depreciate. Recently, the Rockefeller Brothers Fund, a former constituent of Investure, divested their 860 million dollars from the fossil fuel industry as a means of aligning their assets with their environmental principles. They are among a host of individuals, institutions, and private investors to act as leading-edge movers who have committed to divest collectively fifty billion dollars from fossil fuels. If Smith is to “model solutions that contribute to a sustainable future,” we cannot afford to be less than at the forefront of this movement.

Divestment is ultimately the only choice for Smith that is environmentally sustainable, ethically sound, and financially responsible. It is imperative that we communicate to the fossil fuel industry that Smith College will not stand for the destruction of the environment, the marginalization of human beings, or the corruption of our democratic process. We must refuse to take part in some of the modern world’s most oppressive systems, those that profit from the abuse of the planet and its people, and disproportionately exploit people with less money and people of color. As Smith College community members we must all work together to safeguard the mission and future of our institution while maintaining the financial integrity of our endowment.

Divest Smith College is excited to continue to work collaboratively with the administration, the Board of Trustees, and the larger Smith College community to encourage more dialogue about divestment. It remains our belief that divestment is the right choice for Smith, and we are eager to continue to push for a diverse and dynamic conversation about the benefits and tradeoffs of aligning our money with our morals.

Below is the wording of the student body referendum on the SGA Spring Election:

YES: I, as a member of the Smith College student body, support the sentiments expressed in this letter. As stated below, I believe that Smith College has a moral and financial responsibility to divest our endowment from the fossil fuel industry. I ask that this letter be considered by the Board of Trustees.

NO: I, as a member of the Smith College student body, do not believe that Smith College has a moral and financial responsibility to divest our endowment from the fossil fuel industry.

Text of the Letter:

Dear Smith College Board of Trustees,

The extraction, transportation, and use of fossil fuels cause damage to communities around the globe, to the environment, and to the climate. For more information about the fossil fuel industry and Smith’s investments, please visit divestsmithcollege.com. Because the moral implications of remaining invested in the fossil fuel industry contradict the Smith College community’s longstanding commitment to being pioneers in social and environmental justice movements and their stated commitment to achieving carbon neutrality by 2030, it is the opinion of the student body that Smith College must take concrete steps towards divesting from the fossil fuel industry. We, the student body, request that the Smith College Board of Trustees be aware of our belief that the college has a responsibility to:

1. Freeze any new investment in fossil-fuel companies, and commit now to divest within five years from direct ownership and from any commingled funds that include fossil-fuel public equities and corporate bonds.

2. Publish an annual progress report about the exposure of Smith College’s endowment to the fossil fuel industry. 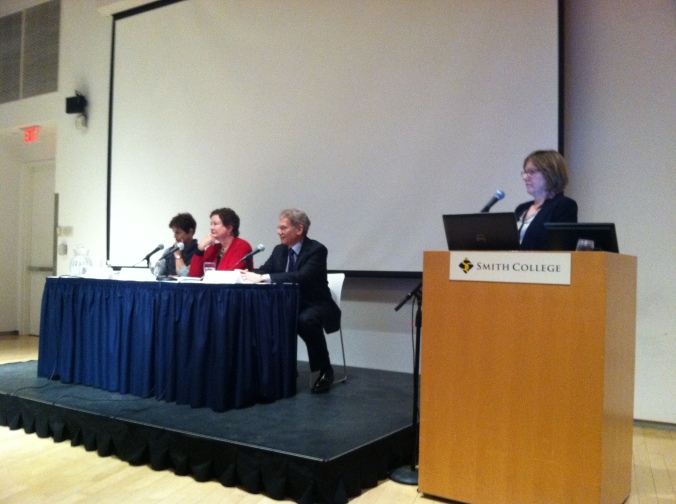 Below is the full text of an article originally published in The Sophian following the panel discussion hosted by President McCartney about Divestment.

After publicly recognizing the threat of climate change, Smith created the Sustainability and Climate Action Management Plan, which details how Smith will reach carbon neutrality by 2030, although it does not mention investments. In the past, Smith recognized the political statements made by our assets and divested from companies operating in Apartheid South Africa during the 1980s, and in Sudan in 2007. By refusing to recognize the implications of investment in the fossil fuel industry, Smith is making a statement that our institution supports the harmful practices of fossil fuel companies that result in community and environmental destruction, while simultaneously perpetuating climate change.

Divest Smith College, a network of concerned students, advocates that Smith cease investing our endowment funds in the fossil fuel industry, because Smith has the responsibility to reflect institutional values in its financial decisions. This divestment campaign is backed by strong support from the student body, a third of whom have signed a petition advocating for divestment from the fossil fuel industry.